Tamarite IV marks the penultimate episode of the Tamarite saga, and similarly to the second it and the final one it will consist of a series of notes about random events and thoughts.

After three weeks I knew almost all of the children of Tamarite. I was effectively a celebrity. I was watching How Not To Live Your Life as an activity with one of the kids, and the mantra ‘always think with your balls’ seems to have rubbed off on him. He has told his friends about the phrase and they all seem to say it now. I’m happy I taught him something of value.

The older kids are at that age where they haven’t smoked weed yet, aren’t entirely sure what it is and are therefore absolutely obsessed by the idea of it. Presumably they think ‘getting high’ is among one of the coolest things one can do. When I walked through Tamarite the kids would surround me and demand that I say ‘Smoke Weed Every Day’ in the voice of Dr Dre, which I did reasonably well once and they found absolutely hilarious. Most of the time I would decline to do it, and they would follow me round, saying ‘oh please Jim, say smoke weed every day, please!’ I would perform for them the odd time, of course just to make the happy. Which reminds me…

One of the highlights of my time in Tamarite was when I was invited to a meal with the other Au Pairs at a farm in the neighbouring town of Esplus. It was a pittoresque farm, surrounded with apple orchards in which white horses were grazing and rooster gangs roamed free. There were telephone masts in each corner of the property, each one with a nest on top, and a stalk stood completely still on one leg, watching over, feathery sentinels.

In the early evening we bathed, and then played badminton in the swimming pool before it was time for dinner. We opened a bottle of Rioja, and made a real mess out of the cork, half of it crumbled its way into the wine itself. There were flies everywhere, in your hair, on your lip, on your plate. One of them landed right in my glass of red and entered a pitiful cycle of treading water/drowning among the powdery islands of cork. It took me several attempts to fish it out with my finger, and I ended up having to press its wet, filthy body up against the side of the glass. If it survived the drowning, and the crushing against the glass, it had surely drank itself to death, not a bad way to go. I drank the wine anyway so as not to be discourteous.

The food was all right. Now if there’s two things the Spanish love other than fags and beer, it’s bread and flesh. The meal consisted of Sausage, Salami, and Serrano Ham. The bulk of it however, was tortilla -known as Spanish Omlette in the UK. With a load of salt on them these things are bang on the money. After a bit more wine, the party began to take a change of direction. We were told we could put our own music on, so I stuck on that Sing It Back remix and we all sat at the table with the rest of the corky wine. A girl says to me, ‘I didn’t think you’d like this music?’

‘Oh yeah, what music did you think I would like.’

All of a sudden, the host- Suzy comes out of the house holding a tray full of paraphernalia, and asks ‘would anyone like to roll a joint?’ She then takes the tray closer and reveals that it’s got a box on it full of all the necessary utensils, and piles of tobacco and dried cannabis sitting there, harvested and waiting to be turned into a spliff.  Suzy tells us it’s homegrown, none of this super genetically modified, will make your kids grow two heads, skunk stuff that they smoke in the UK. The weed was really smooth – the way God intended, and needless to say it complimented the music wonderfully. We had arranged a lift back pretty early, and it soon came. We all went our separate ways, wishing the evening could last longer, but delighted with the time we had spent. Dr Dre and Snoop Doggy Dogg would have been proud.

I soon grew to appreciate the Spanish custom of going to the swimming pool every day. I grew to love a glass of lemon iced tea in a plastic cup with ice in it. By the pool you can lie on your towel, read, sleep, reflect, listen to music, drink, play cards- which are five of the best. I would even jump in the pool occasionally, and try my arm at swimming.

I really don’t much care for swimming. I struggle to think of an activity quite so tedious and boring. Now I don’t like jogging either, but at least it offers a wide variety of scenery to look at. Swimming is just intelligent splashing, up and down and up and down the swimming pool. The only thing it’s got going for it is the whole wetness thing, which admittedly does make a change from our mostly dry lifestyles. I now completely understand why as a species we have no fins, -our primate ancestors clearly wishing to avoid the activity of swimming wherever possible, not through fear of being eaten by a crocodile, but through fear of being bored to death.

I can’t swim very well at all, which I accept might constitute part of the reason for my antipathy. I do quite a lot of flapping around, but don’t seem to go anywhere, my body threatening to sink at any moment. It’s very frustrating to thrash around like a shark and get no rewards for it. I usually jump in the swimming pool intent on swimming lengths, swim halfway across the pool to where it is shallow enough to stand, then get bored, forget what I’m doing and stand there daydreaming until I feel like getting out again.

I do mildly enjoy diving in though. It’s not often you get to leap off something face first. It’s not like in England where diving is presumably seen as offensive and not ‘politically correct’, in Spain you can dive to your heart’s content. After a dive you can swim underwater for a bit, and see how far you can travel before having to surface for oxygen in order to avoid death. I was doing a variation of this once, very slowly and casually, swimming towards an empty space by the side of the slow lane. Almost as soon as I got under the surface I hit something. I turned out to be a very bald, very serious man in goggles and weird swimming flippers on his hands. He looked like an overgrown, dilapidated seal with legs. The collision set him off and he proceeded to launch a tirade at me in Spanish. I nodded along occasionally, saying ‘si’ occasionally, despite having no idea what he was saying. I remember thinking after five minutes had passed, what on earth is he finding to talk about for this long? I’m dreadfully sorry- can we please just get on with our lives now?

You  will have noticed that the featured image is of a mountain. We walked for eight kilometres through the Pyrenees mountains, mostly on the sides, among the pine trees that cling to the mountain side like a dark green rug. I saw some very beautiful things there. We followed the path of a stream. It travelled down giant stone steps that look as if they were created for a community of giants, by giants. The water would collect at the bottom of each step, and would take a mesmerising azure colour, and rest momentarily in a miniature lagoon before trickling down through towards the sea. Some people would bathe in these pools, but I forgot my swimming trunks, which was a tragedy.

Once you’ve walked most of the way, you reach a mountain valley, which is all but obscured by the preponderance of green leaves, their colours gilded green-gold as they bask in the showers of sunlight that pour down into the valley from above. In arbitrary places, many all-but-dead trees would poke out of the vegetation, standing there like silver skeletons. Relics of the all-but-dead past, contrasting the impregnable, vibrant life of the present.

As we walked the valley dug deeper into the ground, until two rocky mountain walls were towering on either side. I had never seen something so enormous. To be among nature so incomprehensible. To be in the middle of a natural phenomenon of mountainous proportions, something that took millions and millions of years of wind and water and erosion to form, to see the crumbling old patterns of the rocks half way up the mountain was get a glimpse of the truly ancient Earth and it’s lifelong flesh, to see nature’s tyranny upon all matter, to view nature’s perpetual work of art. To walk in the valley was nothing less than to taste a morsel of eternity. To walk in the valley was to come face to face with what will murder us and recast our bodies into new life. To come face to face with the valley that swallows all life and spits it out into trees, water and earth. To walk here was to walk in the valley of all life and all death. 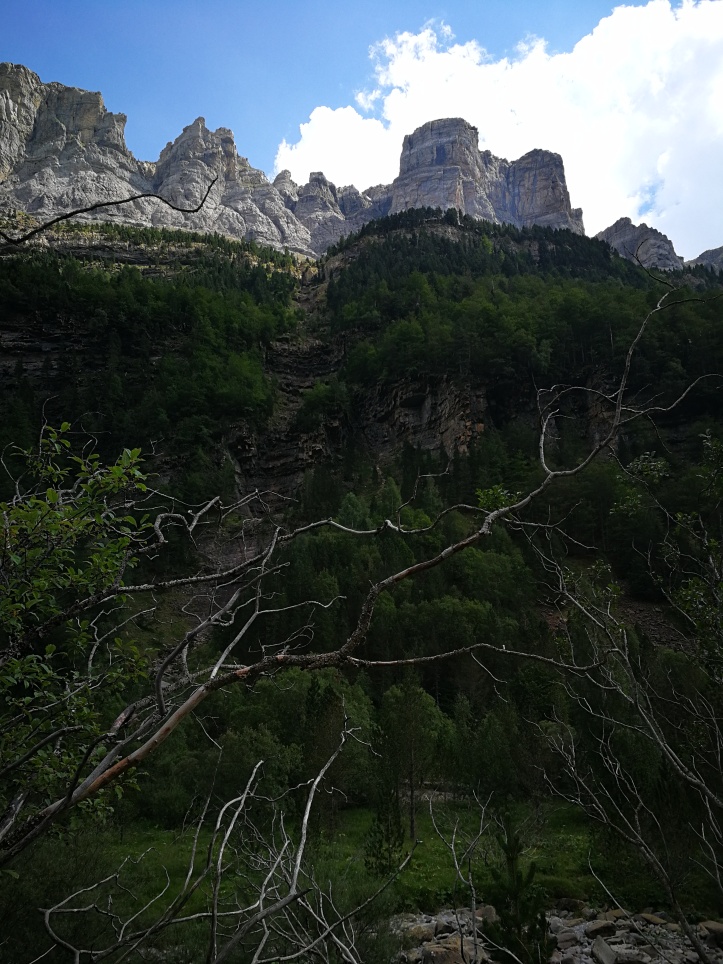