I had been planning on reading Macbeth for a couple of years and finally decided to do so last week. I absolutely fell in love with it, as I did with most of Shakespeare’s great tragedies- Lear, Hamlet and Othello being my favourite three. I highlighted a few lines that I found particularly interesting and comment on them. With some lines of course, I am lifting them out of context, but that’s the beauty of the exercise. Add to them what context you like. They’re rich, ripe and ready for transfer.

Alcohol, drugs, sex, murder, England, war, the news, the mediocrity and pointlessness of life. This one has got it all.

It really is true that Shakespeare is ripe for modern interpretation. What he says can be relevant and sometimes the resonance is startling. Whatever world Shakespeare was dramatising, so much of it survives in our world today, for better or worse.

As Macbeth frantically broods on his fears and his desire to murder his nearest and dearest in order to gain power, his wife advocates mindfulness.

so poorly in your thoughts.

If only they had the Headspace app back then, everyone might have lived happily ever after.

When a naive Macduff (the play’s dullest, most flavourless character and also its hero) asks about the effects of alcohol, the Porter offers an extraordinary series of opinions.

What three things does drink provoke?

Marry, sir, nose-painting, sleep, and urine. Lechery, sir, it provokes and unprovokes. It provokes the desire, but it takes away the performance. Therefore, much drink may be said to be an equivocator with lechery. It makes him, and it mars him; it sets him on, and it takes him off; it persuades him, and disheartens him; makes him stand to and not stand to; in conclusion, equivocates him in a sleep, and, giving him the lie, leaves him.

Alcohol makes you have a red nose, sleep long into the mornings, urinate excessively, and it drastically increases sexual desire, yet makes you very bad in bed (makes you ‘stand to and not stand to’, ie up for it but can’t get an erection).

We’ve all had em, only difference is here Macbeth is playing down the fact he’s just brutally murdered the head of state.

Where we are there’s daggers in Men’s smiles.

I am one, my liege

Whom the vile blows and buffets of the world

Hath so incensed that I am reckless what

I do to spite the world

Here Bill was onto some very early psychodynamic theory. This is the explanation that lies behind every murder. The killers certainly did not have nice, pleasant healthy upbringings. They were abused- they’re angry, confused and unbalanced, so they lash out at the world.

Spoken by one of three characters with no names, they are simply Murderers.

There’s but one down. The son is fled.

I include this one only because I like to think the phrase ‘one down, two to go’ originates from this third murderer commenting on how he has killed Macduff’s young son, but not quite yet managed to get to his wife.

In act 4 a group of witches erupt into rhyme while working their twisted magic. I’ve included it all because I think it’s a display of poetic mastery.

Fillet of a fenny snake,

In the cauldron boil and bake;

Eye of newt and toe of frog,

Wool of bat and tongue of dog,

For a charm of powerful trouble,

Scale of dragon, tooth of wolf,

Root of hemlock digg’d i’ the dark,

Gall of goat, and slips of yew

Silver’d in the moon’s eclipse,

Nose of Turk and Tartar’s lips,

Make the gruel thick and slab:

For the ingredients of our cauldron.

Cool it with a baboon’s blood,

Then the charm is firm and good.

Enter HECATE to the other three Witches

And now about the cauldron sing,

Live elves and fairies in a ring,

Enchanting all that you put in.

Where does invention come from? It’s certainly not the poetry of any man, but some kind of God. A minefield of powerful imagery, short one syllable creatures and things. It’s an expedition.

Read it and speak it aloud, it’s one of the best adverts for our language you’ll ever see.

Each new morn new widows howl, new orphans cry, new sorrows strike heaven on the face, that it resounds as if it felt with Scotland, and yelled out like syllable of dolor.”

This is the world we live in, relentless pain and suffering going on in the background. See the news.

When Malcolm and Macduff are contemplating how screwed the country is. Again, a relatable state of affairs, with Brexit sucking the life out of British politics, our national health service on its knees, knife crime epidemic in the capital, increasing homelessness, terror attacks, Islamist rape gangs…

I think our country sinks beneath the yoke

It weeps, it bleeds, and each day a new gash

Is added to her wounds.

If you ever want to describe someone you think is really bad, simply replace Macbeth with whoever you’ve got in mind.

Not in the legions

Of horrid hell can come a devil more damned

In evils to top Macbeth

If ever you want to issue a caveat for some extremely bad news, like your wife and only child have been ‘savagely slaughtered’ in your own castle or there are no snooker tables available at the club

Let not your ears despise my tongue for ever,

Which shall possess them with the heaviest sound

That ever yet they heard.

To their deaf pillows will discharge their secrets.

Everything is so extremely fucked that your wife or husband is probably dead, and you’re so desperate and insane now that with no one to turn to, you are sharing your own nastiest secrets with your pillow.

On the decline and impotence of Macbeth

Those he commands move only in command,

Nothing in love. Now does he feel his title

Upon a dwarfish thief.

What an excellent metaphor to describe the Joffrey Baratheons of the world, in power but unloved, despotic and weak.

A servant approaches Macbeth with the news that an army of ten thousand English have turned up ready to dance. A truly hilarious exchange, Macbeth really, really does not like this man, specifically, he doesn’t like many aspects of his visage.

Where gott’st thou that goose look?

There is ten thousand-

Go prick thy face and over red thy fear

Thou lily-livered boy. What soldiers, patch?

Death of thy soul, those linen cheeks of thine

Are counsellors to fear. What soldiers, whey-face?

The English force, so please you

Can we ever know what he meant by whey-face? Probably not, but it’s extremely funny.

Maccy- B has just been informed that his wife has well and truly lost her marbles. He is talking to the doctor

Cure her of that.

Canst thou not minister to a mind diseased,

Pluck from the memory a rooted sorrow,

Raze out the written troubles of the brain

And with some sweet oblivious antidote

Cleanse the stuffed bosom of that perilous stuff

Which weighs upon the heart?

Can we cure mental illness, a bit of the good old mind crushing depression perhaps, with the use of the good old narcotics? Bit of Prozac to balance those serotonin levels, nice dose of psilocybin or LSD to change the way you look at the world, or maybe just a big, no bollocks hit of smack straight into the cephalic vein?

Many people try. Does it work? I don’t know. Interesting question.

I presume this next part is one of the best known parts of the play. Dick Dawkins even took Brief Candle for the title of his memoirs. This angry nihilistic monologue is something we can all relate to, the atheists among us. The absurdity of getting out of bed and going to work each morning, the relentlessness of existence, the only true respite occurring when we are dead in the ground, when everything that went before gets chalked off the board, rendered completely and utterly meaningless.

Creeps in this petty pace from day to day

To the last syllable of recorded time.

And all our yesterdays have lighted fools

The way to dusty death. Out, out, brief candle.

Life’s but a walking shadow, a poor player

That struts and frets his hour upon the stage,

And then is heard no more. It is a tale

Told by an idiot, full of sound and fury,

This is coming from a person who has reached the apex of human suffering, as any protagonist of any tragedy invariably achieves. A tragedy is guaranteed to display pure, abject misery. That’s why when the Greeks started it up, it was so good to watch. Because it made the spectators feel lucky that they themselves had such pleasant, calm and positive lives in comparison. Macbeth- this is what could happen folks. This is what happens if you overreach, if you one day get out of bed and decide you’re not going to go to work today, you’ve decided you’re too good for that and you’re going to be the King.

Aristotle claimed tragedy served the purpose of purgation. By watching it and being free to enjoy such a ludicrous display of agony, crime and misery, we are indulging our own violent impulses without acting on them, and in doing so, purging ourselves of them. By watching this play, we are cleansed and purified. It’s the same as watching a horror movie. Why do you get pleasure out of that?

Because you’ve sampled a slice of hell, you’ve ventured there in your mind, you’ve seen what it looks like, you’ve observed its character. But when the movie is over, there you still are, sat on your sofa, in the real world, with something to live for; a family to love (they haven’t been brutally murdered by your enemies, or cursed by witches), friends to hang out with, food in the cupboards, water in the taps to keep you alive. The world we live in is bad, but it’s not Macbeth bad.

I loved writing this. If you like what I’ve done her make sure to show that so as to give me the energy and motivation to move onward and do more. Much appreciated and thank you for reading. 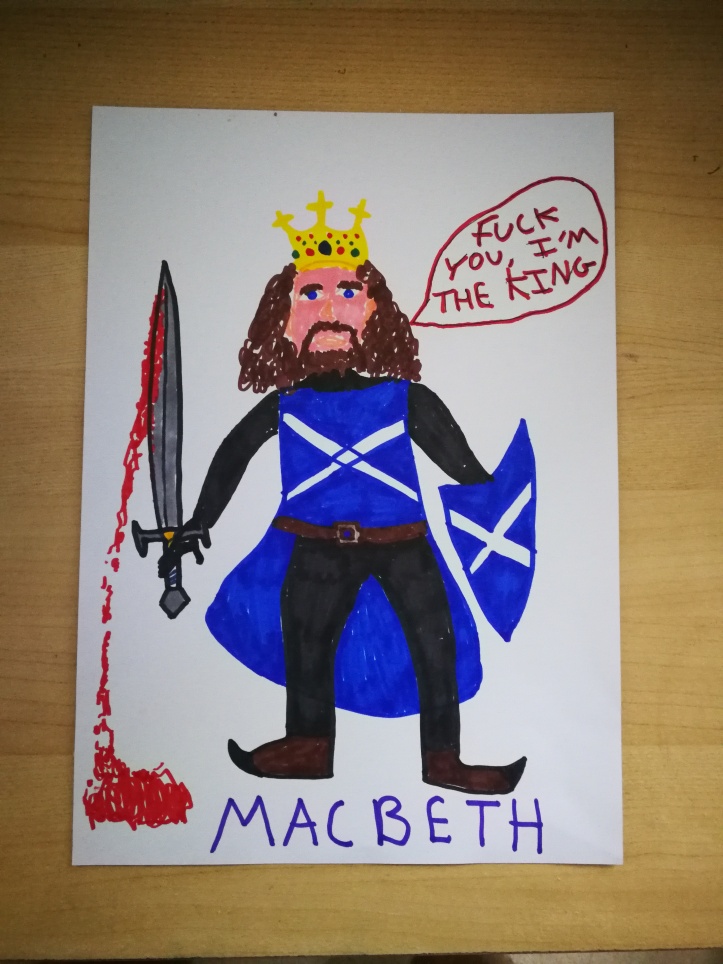